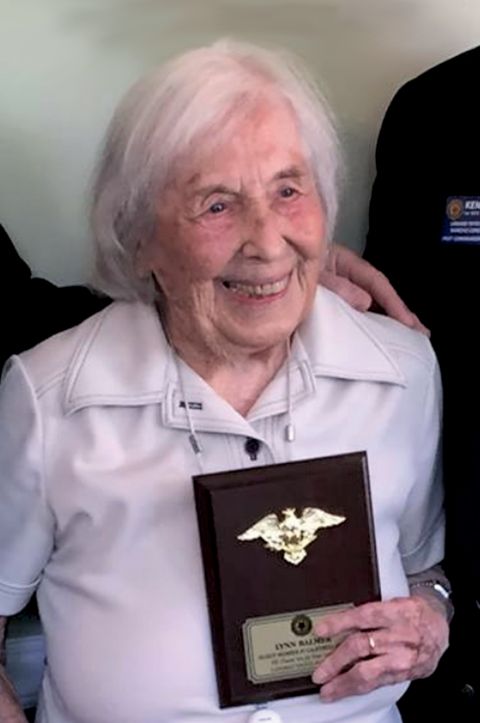 Women’s History Month celebrates the vital role of women in American history. The vibrancy and legacy of women past and present unifies and nourishes our collective whole as we march onward towards fundamental human equality.

Lieutenant Lynn Balmer, born September 12, 1907, on the family homestead in Plumas, California, has seen history unfold before her eyes and is creating a bit of history herself. At 109 years old, Lt. Balmer is the oldest living female veteran in the United States. She is the second oldest veteran in the United States (Corporal Richard Overton of Austin, Texas is the oldest veteran at 110 years old).

After WWII started, Lynn Balmer joined the military, “to free a man for active duty.” She served in the U.S. Coast Guard and achieved the rank of Lieutenant (junior grade) LTJG. Lt. Balmer secured a top-secret clearance and worked in Military Intelligence. Using her keen mathematical abilities, she read and interpreted weather maps and charts and used morse code to help ships navigate through dangerous waters and adverse weather conditions between the United States and England.

Prior to her military service, Lt. Balmer was an elementary school teacher, teaching her first class in 1927. She later taught mathematics to high school students. In 1943, her passion for teaching and love for her students, (having no children, she treated each and every child as her own) gave way to her patriotism and love of country when she enlisted in the U. S. Coast Guard.

Between the years of 1946 and 1967 she attended the University of Washington part time, taught mathematics to junior high school students, volunteered at a children’s orthopedic hospital, and was a professional skater to boot! She retired and moved to Chico, California, in the late 1990s with her husband, Charles (now deceased). At 109 years old, she presently lives comfortably in an assisted living facility in Chico, adored by her loving family.

Lynn Balmer’s passion for life lives on. She tells stories about living through World War 1, living through the nationwide flu epidemic in 1918 by wearing bags of asafetida around her neck to school, living through the Great Depression, and when there were shortages of grain and sugar, feeling very lucky that her father had bees so their family of nine children had honey.

The Women’s Suffrage movement was going strong in her childhood and when Lynn was 18 years old, she remembers that her mother got to vote for the first time in her life during the 1920 election. When Lynn became of legal age, she, too, proudly exercised her right to vote and encourages all women, young and old, to exercise their hard-earned right to vote.

She is also a lifetime member of the American Legion Auxiliary Unit 637, Citrus Heights, California, where her Great-niece, Brenda Hicks Sheriff is President, and Virginia Hicks (Sgt. Hick’s wife and Brenda’s mother) is Treasurer.

On September 12, 2017, Lt. Lynn Balmer will celebrate her 110th birthday. She did not, and does not, let life pass her by. She still has richness of character, strength, gentleness, and her pioneer spirit.

During Women’s History Month, it is only fitting we pay special tribute to Lt. Balmer during her golden years and reflect upon and celebrate the lives of famous women pioneers and leaders in our history, as well as celebrate the unsung woman heroes of our daily lives.