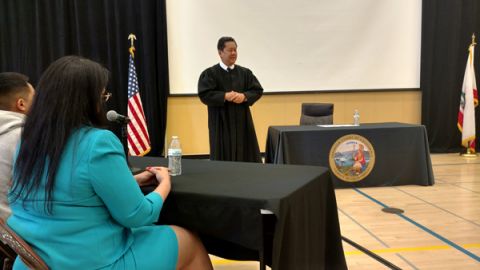 Mary Beth Long-Randall, a graduate of Del Campo High School, shares her personal story of tragedy with students at the school during a special DUI Court in Schools Program held April 28.

Standing firm in a teal suit and black glasses, attorney Paula Spano turned toward the crowd of roughly 1,000 Del Campo High School students seated behind her and delivered this stern admonishment: “You all look like very nice people, but I never want to see you in my courtroom,” she said.

Spano, who works for the Sacramento County Office of the Public Defender, is assigned to the first-offender and misdemeanor DUI Court in Schools Program, first launched in San Joaquin County in 2003 and then in Sacramento County in 2010. Funded through a grant from the National Highway Traffic Safety Administration, the program brings actual DUI court cases to area high schools, and Ms. Spano was trying the tell the students in a round-about way she hopes they never need her services.

The DUI Court in Schools Program gives students a sobering opportunity to sit inside a court room where a real judge, a real defendant and a real prosecutor deliberate the sentencing phase in a DUI case and hand down the punishment, all in real time.

The intent is to expose young people to the actual legal and financial consequences of a DUI court conviction so that they may make better choices when they get behind the wheel. It also aims to remind them of the heart-wrenching impact on communities and families DUI cases involving injuries and fatalities can have.

“The hope is that we can affect at least one person today by showing the actual ramifications of driving under the influence,” said Deputy District Attorney Brian Morgan who prosecuted the April 28 case at Del Campo.

More than 6,000 DUI cases are assigned to the Sacramento County Superior Court each year, Spano told the students. Her program, however, involves only cases concerning first-time offenders and those where there have been no serious injuries or loss of life. In exchange for volunteering to participate in the program, Spano said, defendants may be offered a reduced sentence of some form.

The Del Campo hearing was preceded by a jarring, 10-minute video montage of reenactments of drunken driving accidents and their aftermaths involving mostly teens or young adults. Once in session, Morgan delivered the facts of his case against the 22-year old defendant seated next to his attorney, Ms. Spano, before Sacramento County Superior Court Judge Hon. Russell Hom.

The defendant, identified as “Mr. Wong,” was arrested in downtown Sacramento in January, explained Morgan. He’d been pulled over for speeding and charged with one count of driving under the influence of a controlled substance, and another for driving with more than twice the legal limit of alcohol in his body.

As some students fiddled clandestinely with their cell phones, Mr. Wong plead guilty to the charges against him and Judge Hom delivered the sentence: Five days in jail, fines and court fees likely to amount to as much as $12,000, three years of probation, a suspended driver’s license, and mandatory enrollment in a six-month program for defendants with high blood alcohol counts in their systems upon arrest.

When it was over, Judge Hom stepped down from the “bench” to speak to the students directly.

“What you just saw was real. This was an actual case,” Hom said. Then he gave Mr. Wong an opportunity to reflect and explain to students and the court what he was thinking the night he downed as many as three shots of hard liquor before getting behind the wheel of his 2000 Dodge Infinity and speeding through town at 3 a.m.

“I felt like I was good enough to drive,” Wong said, before admitting to having driven under the influence many times prior. “I guess I just had that mindset that kids do. That we are superior to everything,” he said.

Not all DUI sentencing cases end with fines, fees and jail time. It’s well known that a good number of them involve horrific accidents causing deaths and life-altering injuries that bring unspeakable loss to victims’ families and loved ones, a fact the deputy district attorney made clear during a post-trial Q&A with the students.

“You know the difference between that video you saw and Mr. Wong? Dumb luck. Dumb, damn luck,” Morgan said.

Mary Beth Long-Randall, a graduate of Del Campo High School also addressed the students as a friend held up a photo of her brother, Harrison and his twin sister, both also Del Campo graduates. Between sobs, she slowly walked the students and the members of the court through the day in 2012 when a drunken driver with an apparent history of DUI arrests, barreled through an intersection in their neighborhood not far from the school, leaving her brother, who was walking with his girlfriend at the time, so horrifically maimed he succumbed to his injuries 13 days later. He was 21.

Pleading with the students to think about their choices, Long-Randall reminded them of the irreparable damage caused to her family and countless others via the choices made by drunken or impaired drivers.

“Don’t make your community suffer. Don’t make your family or your parents suffer,” she said. Many students approached her afterward to offer hugs and support.

Judge Hom asked for a show of hands from those who’d had the experience of getting into a car with a driver they knew was impaired. Juliana Gordon, a senior at Del Campo raised her hand and explained she could identify and, although scared at the time, she got in the car anyway, something this program also tries to address. Young people must learn about the consequences of driving under the influence, but they also need to be given permission to tell friends or family members who’ve been drinking or getting high they won’t be getting in the car with them.

For Gordon, it was another case of dumb luck.

“I just got in the back seat and prayed,” she said.