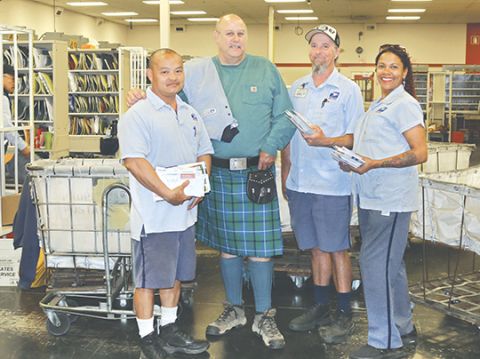 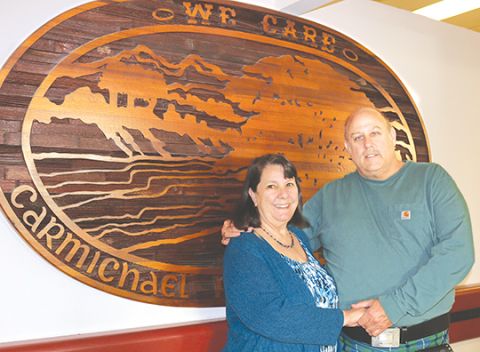 Douglas will dance with sweetheart Marianne DeSilva on their April wedding day.

CARMICHAEL, CA (MPG) - One of the most recognized men in Carmichael, Ricardo Douglas, has been part of the community for 30 years. When a band strikes up in Carmichael Park, the public sees him out dancing. At his Post Office window, he estimates he has helped around two million customers. This month, the 6ft 2in clerk hung up his XL uniform and retired from bureaucratic life.

He and 90 postal colleagues celebrated with a 7 am potluck. “Anything social has to happen before our delivery guys start their rounds,” he explains. “I’d made my farewell speech before most Carmichael people were even out of bed.” The retiree had many to thank: “I was a Marine corporal when my Staff Sergeant, Fred Cooks, suggested I’d be good at postal work.  I had a photographic memory and I understood data. It was one of the best suggestions in my life. Two postal workers, Mark and Ken Goto, coached me for my job interview. Personnel manager Helen Schuck hired me.  Her daughter, Frances Jones, was my first supervisor.

Douglas, then 22, signed on as a distribution clerk in 1988. The Post Office was then on Palm Drive; it moved to front Carmichael Park four years later.  The clerk enjoyed short commutes. “I rode my bicycle to work from my Marconi Avenue apartment at 3:45 am,” he recalls. “We broke down big cages of mail every morning; we sorted packages, magazines and letters. Then we distributed everything to carriers before 8:30 am. I had to memorize 1150 street segments of 57 postal routes.  These days, much of this is done by machine.”

Soon Douglas joined window clerks at the front counter. “They’re called sales and service associates these days,” he says. “I had a lot to learn; the public was more challenging than I’d thought. You got used to grumpy old men, but from your window, you also encountered a huge range of human emotion. Someone might have just lost a spouse; a battered wife might be starting a new life; an immigrant might be fearful of officialdom and struggling with a new language.”

A modern phenomenon, he observes, is young people who don’t know how to mail – or even write – a letter. “All transactions in their lives have been electronic,” he explains. “The process of getting a document in the mail is a mystery to them.  Much like a bartender, you listen and try to make helpful suggestions. I could often glance at people in line and know what they wanted before they even spoke. I learned to be ready for anything that came at me.” Committed to service, Douglas learned Spanish. “I also memorized phrases like, ‘Do you want to buy stamps?’ in Arabic, Croatian, Russian, Chinese and Japanese,” he says. “It’s gratifying to see eyes light up when someone hears ‘thank you’ in their own language.”

The clerk also put thousands of hours into mastering sign language. “Because several local agencies cater for the deaf, Carmichael has a higher than normal population with hearing impairments,” he explains.  “Many of these people heard about me. They came to my window and automatically began signing. I was proud to help.”

Aged 54, Douglas opted early retirement. “I wanted to enjoy my new home and a new life with my new wife,” he explains (he will this month wed sweetheart Marianne DeSilva, a realtor with Security Pacific in Fair Oaks).  The couple plans to travel the nation by RV and revel in outdoor living that decades of office work prevented. “Working long hours in the Post Office, I also missed out on many social and family events,” says the future bridegroom. “It will feel great to have a normal life, with Saturdays off.”

On Carmichael turf, fiancée DeSilva often feels like a celebrity’s date. “Everywhere we go, people know him,” she says. “We ran into nine of his customers recently in the Safeway store. They recognize Rich whether he’s in uniform or not. To everyone, he’s Ricardo from the Post Office.”

Douglas (christened Richard) is nevertheless as Celtic in origin as the kilt he sports for special occasions.  “My name changed when I worked part-time for a tobacco dealer in Citrus Heights,” he explains. “His Cuban patriarch translated everyone’s names to Spanish. I got so used to it, that eventually I put ‘Ricardo’ on my uniform name tag. Everyone who came to my window called me that for years.