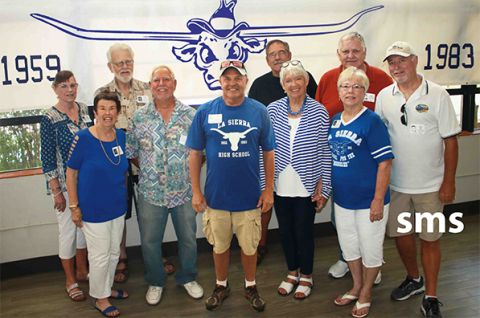 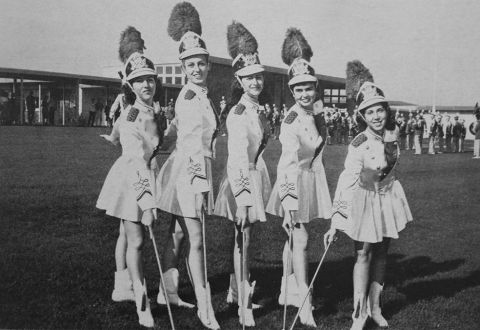 CARMICHAEL, CA (MPG) - Almost lost forever, relics from Carmichael’s only high school were center of attention at the recent foundation alumni reunion. Yearbooks, trophies and pennants were among treasures salvaged when La Sierra High closed in 1983.

For 30 years, its Longhorn traditions had been part of Carmichael life. By the 1980s, declining student numbers obliged San Juan School District to relocate teenagers to Fair Oaks and Arcade schools. The grieving Longhorn herd scattered as demolition began but, thanks to one alumnus’ foresight, many memories were saved. School historian Tony Asaro was an administrative staffer during the school’s final years. “One day in 1983, a staff secretary called and told me that school treasures were being purged,” he recalls. “I drove my truck to the dumpsters and filled it up.”

Among relics were hundreds of “Longhorn Round-up” yearbooks still in Asaro’s keeping. “You don’t want to see my garage,” he confesses. “Over the years I’ve given many away to former students.”  He also rescued the fabled fiberglass mascot named Sir Loin – so enormous it bestrode its own trailer – that students paraded at games and rallies. “Sir Loin lived in my side yard for ten years,” he says. “My neighbors got used to a giant blue and white longhorn looking over their fence. But eventually he had to go. I found the art teacher who’d helped make him. I understand Sir Loin is buried somewhere in the foothills.”

Pre-closure, teachers donated many school trophies to former star athletes. A plaque commemorating 17 graduates who died in the Vietnam War was removed to the home of a La Sierra PE teacher. It is displayed annually as part of Veterans Day ceremonies that unite the community in a nature reserve adjacent to the school.

Now administered by Carmichael Park District, the school campus is a community hub. The cafetorium serves as a town hall; re-purposed facilities house sport, education and arts centers. “We went to a great school,” observes Asaro. “La Sierra was our Camelot – the center of our lives. We’re glad it’s still a jewel for the community.”

More than 200 foundation alumni last month filled the cafetorium for their 60-year “Longhorn Social” reunion. Mascot Sir Loin glared from tee shirts and banners as alumni pored through Asaro’s year books.  Though the salvager was a later graduate, attendees welcomed the 70-year-old like a homecoming hero.

“La Sierra students are sentimental,” explained reunion co-organizer Brenda Beers Mock.  “We foundation students wrote the fight song; we chose the mascot and colors. Because our school’s not there anymore, we’re even more sentimental. Tony Asaro’s younger than us but we’re grateful he has the same feelings for our school. What he saved is almost all we have left.” Learn about La Sierra alumni activities on Facebook.