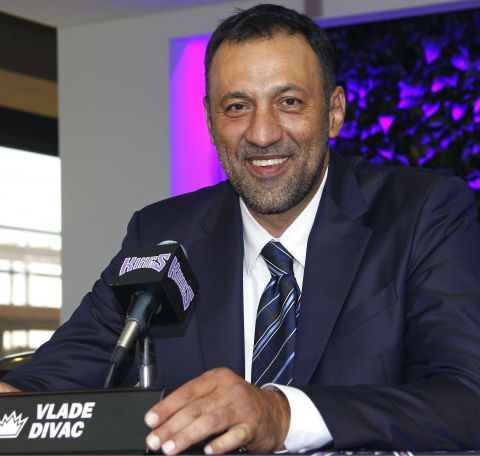 Basketball legend, humanitarian and former Carmichael resident Vlade Divac has been named 2016 Person of the Year by the Carmichael Chamber of Commerce. Now general manager for the Sacramento Kings, the gentle giant will receive his honor at the Chamber awards banquet on April 8th.

The celebration will be among inaugural events at the new Milagro Centre on Fair Oaks Boulevard.

Carmichael is like home turf for Serbian-born Divac, who recently expressed nostalgia for his old Kingsford Drive neighborhood. From memories of cruising streets on his motorbike to playing basketball at his kids’ school, Carmichael still evokes home away from home feelings for the international star. “Although I have lived in many places throughout my career,” he said, “Carmichael will always hold a special place in my heart. I am humbled to be named 2016 Person of the Year.”

Divac, 47, wore Sacramento Kings colors for six seasons of the team’s most winning years. The seven-foot center also scored for the LA Lakers and Charlotte Hornets. The Kings retired his purple and white jersey in 2009 and last year welcomed him home as team mentor and manager. Divac enjoys near royal adulation in his Balkan homeland. Through his own charitable foundation and in cooperation with other Serbian agencies, he and his wife Snezana have raised millions to aid war-damaged children. The couple’s three children include an adopted daughter whose birth parents died in sniper fire during the Kosovo conflict.

The annual chamber fundraiser also hails achievers in business and community fields. Tiner Properties will be named Business of the Year. Founded in the 1970s and now under the leadership of Ben Tiner the Carmichael-based group is among Sacramento’s most prominent real estate firms.

A 54-year pillar of benevolence and annual source of thousands of volunteer hours, Carmichael’s Kiwanis Club will be acclaimed Non-Profit of the Year. A portion of gala proceeds will be donated to the organization.

Anyone may attend April 8th celebrations at the Milagro Centre’s convention room. The facility is located at 6241 Fair Oaks Boulevard. Tickets are $75 per person for a three-course dinner and no-host bar. The event begins at 6 p.m. Advance reservations are required and sponsorships are invited. For information, call (916) 481-1002 or visit www.camichaelchamber.com.