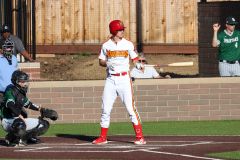 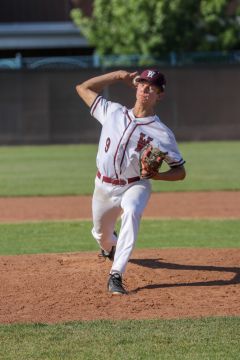 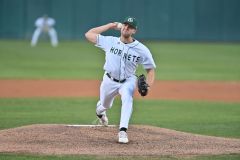 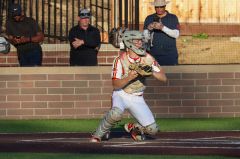 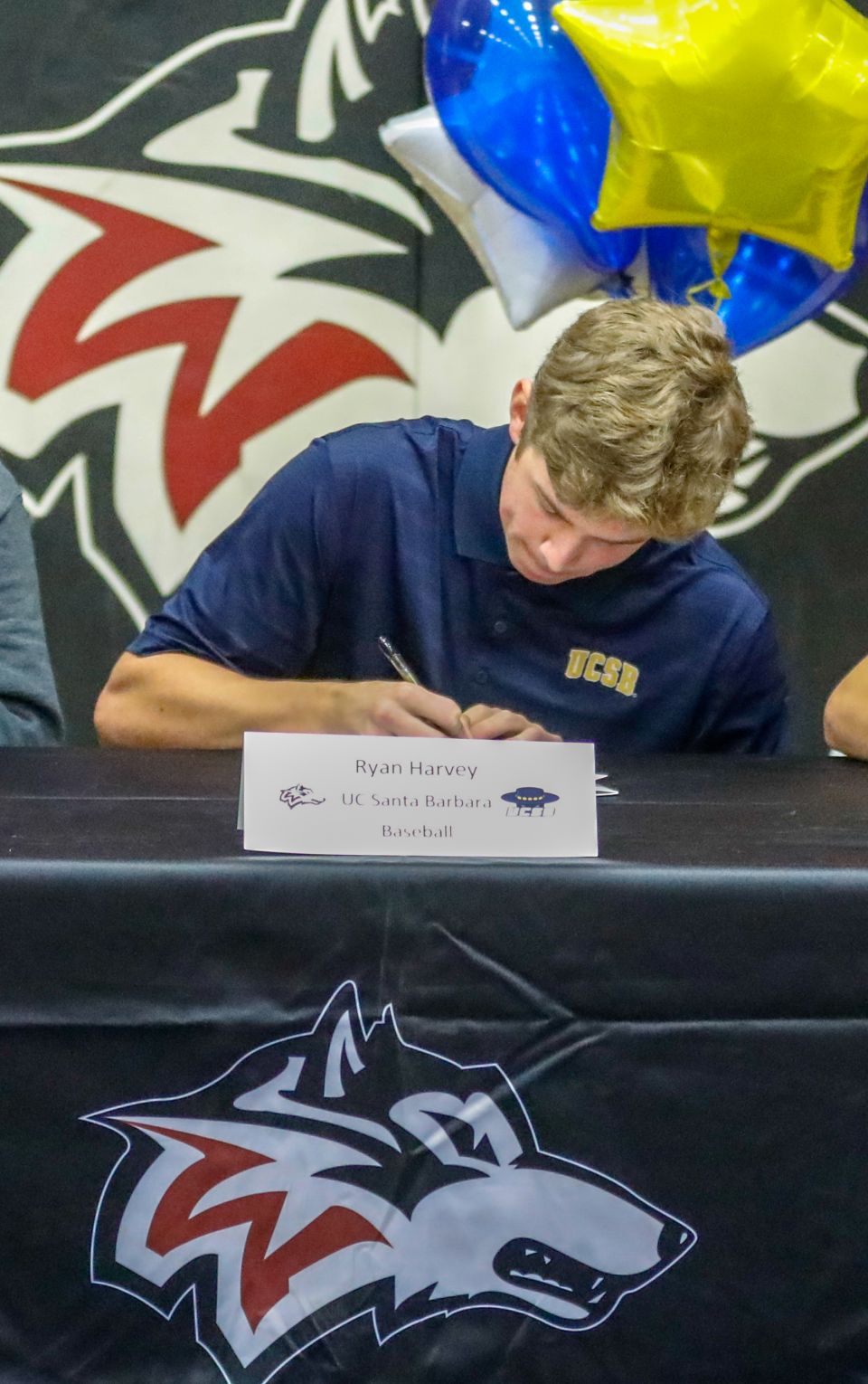 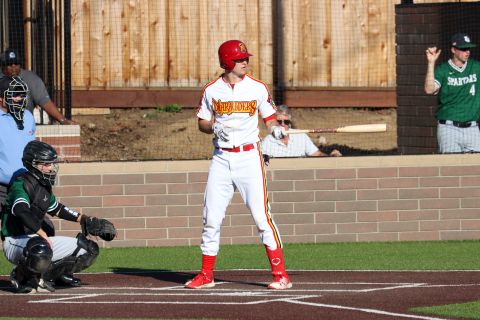 Oakland Athletics catcher Daniel Susac, amid his time at Jesuit High School, stands in the box and awaits a pitch during a 4-1 victory against De La Salle on March 12, 2020, in Carmichael. Photo courtesy of Allene Salerno/Lenie’s Pictures ™ (leniespictures.smugmug.com) 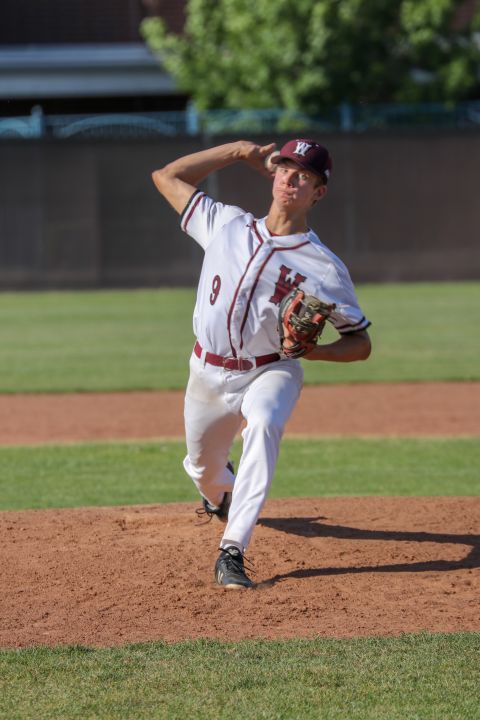 New York Yankees pitcher Ryan Harvey, amid his time at Woodcreek High School, throws a pitch during a 6-5 win over Napa in a CIF Sac-Joaquin Section Division II First Round home playoff game on May 15, 2018, in Roseville. Photo courtesy of Allene Salerno/Lenie’s Pictures ™ (leniespictures.smugmug.com)

Daniel Susac, a 6-foot-4, 218-pound catcher, was the first Sacramentan taken off the board with the No. 19 overall pick in the first round by the Oakland Athletics. Susac played collegiately at the University of Arizona for two seasons from 2021-22 where he was the starting backstop.

Prior to Arizona, Susac played at Jesuit High School in Carmichael before graduating in 2020. His senior season with the Marauders was drastically cut short by the COVID-19 pandemic.

Susac isn’t the first catcher in his family to be drafted to an MLB team in the Bay Area. In 2011, Daniel’s older brother Andrew was selected in the second round of the MLB Draft by the San Francisco Giants. Andrew played six MLB seasons for four teams and won a World Series with the Giants in 2014.

Cooper Hjerpe, a 6-foot-3, 200-pound left-handed pitcher, was the second Sacramentan taken off the board with the No. 22 overall pick in the first round by the St. Louis Cardinals. Hjerpe played collegiately at Oregon State University for three years from 2020-22 where he was one of the Beavers’ best arms. Hjerepe came out of the bullpen in his shortened freshman season before becoming a starter in 2021.

Prior to Oregon State, Hjerpe attended Woodland High School where he pitched and played first base before graduating in 2019. He threw a perfect game for the Wolves against Mira Loma on March 26, 2019, striking out all 15 batters he faced in a dominant 11-0 win in five innings.

Hjerpe now joins the Cardinals organization which is noted as having one of the best fan bases in MLB according to some. One player who recently attested to the greatness of the St. Louis fan base is current Sacramento River Cat, Austin Dean.

“They have probably one of the best fan bases in baseball,” Dean told the Messenger Publishing Group on June 22. “That’s the epitome of baseball right there, (with) amazing fans and an amazing atmosphere as well.”

Nick Vogt, a 6-foot-1, 185-pound outfielder, was the third Sacramentan taken off the board with the 210th overall pick in the seventh round by the San Diego Padres. Vogt played collegiately at the University of California, Santa Barbara for three seasons from 2020-22 as an outfielder.

Prior to UC Santa Barbara, Vogt attended Davis High School until 2019 where he was not only an impressive athlete on the baseball and football fields, but also a “model student” in the classroom according to Davis Athletic Director Jeff Lorenson.

“Nick was an amazing baseball player for us, but more importantly a model student athlete with the highest degree of character,” Lorenson told MPG via email. “He always put his team first and made his school community a better place!”

In addition to his time at Davis, Vogt also spent time playing for another local team, the Yuba-Sutter Gold Sox, who are based in Marysville. Vogt is the grandson of Gold Sox Managing Partner, Al Montna.

According to Gold Sox General Manager Tommy Lininger, over 75 collegiate athletes have moved on to the pros from the Yuba-Sutter-based program. Vogt most recently played for the Gold Sox in 2020, where he played alongside Ryan Harvey.

“It is great to watch these college ball players develop and move forward in their careers,” Lininger said in a recent news release. “We had a solid roster in 2020 and it is no surprise both Vogt and Harvey went so high in this year’s draft.”

Harvey, a 6-foot-3, 195-pound right-handed pitcher, was the fourth Sacramentan taken off the board with the 340th overall pick in the 11th round by the New York Yankees. Harvey played collegiately with Vogt at UC Santa Barbara for three seasons from 2020-22.

Prior to UC Santa Barbara, Harvey attended Woodcreek High School in Roseville where he pitched and played the outfield before graduating in 2019. Harvey played varsity baseball for the Timberwolves for three seasons, reaching the playoffs each year and winning the Capital Valley Conference League Championship once.

“From a very early age, Ryan loved baseball. If something was round, he would throw it. If something was long, he would swing it,” Ryan’s mom, Keri Harvey, told MPG via email. “Ryan grew up playing recreational sports but chose to focus only on baseball after his freshman year of high school. Endless hours of wiffle ball turned into hours of studying his favorite professional players as he looked to gain velocity as a pitcher in high school. He also changed his diet and spent a lot of time in the gym getting stronger.

“These habits led to his success at UC Santa Barbara where he was the closer for the team because of his pitching velocity. While we were always there to support him, and he was blessed with some great coaches, Ryan's dedication, commitment and love for the game got him to where he is today, and we are incredibly proud of him.”

Eli Saul, a 6-foot-5, 215-pound right-handed pitcher, was the fifth and final Sacramentan taken off the board with the 378th overall pick in the 13th round by the Arizona Diamondbacks. Saul played collegiately at Sacramento State for three seasons from 2020-22.

Prior to Sac State, Saul attended Prince of Wales Secondary School in Vancouver, British Columbia. According to Sac State Athletics, Saul is the seventh Hornet pitcher taken in the MLB Draft over the last four years. Additionally, this is the second consecutive year that Arizona has selected a Sac State pitcher joining Scott Randall who was taken in the seventh round by the Diamondbacks in 2021 and is currently at High-A Hillsboro.

Saul and Randall join Chris Kinsey in 2003 as the three Hornets drafted by Arizona. According to Sac State Athletics, the Hornets have now had at least one player selected in 10 of the last 11 MLB Drafts, with a player chosen every year except for the pandemic-shortened 2020 draft. Additionally, at least one Sac State player has been drafted or signed as a free agent in each of the last 15 years and in 19 of the last 20 seasons.

One Sacramentan who anticipated hearing his name called and never did is McClatchy High School alumnus, Malcolm Moore. The highly touted 6-foot-2, 210-pound catcher, is committed to play collegiately at Stanford. Due to his strong commitment, MLB teams shied away from risking a draft pick on the 18-year-old who was likely going to Palo Alto regardless of where he may have been selected.