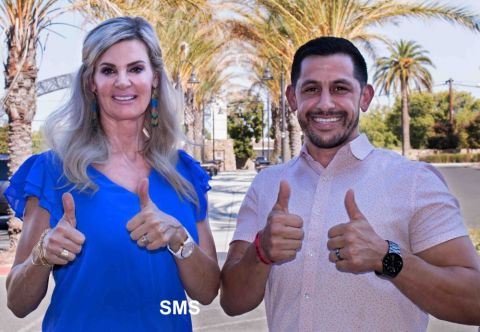 Kerri Mandes is a fitness trainer. Ronnie Sylvia sells real estate and works out five times a week. Both have biceps flexed, vying for the mayoral sash. The community can meet the contenders during a Mayoral Mingle event at Oakmont senior residence on September 28.

The mayoralty is a Carmichael Chamber of Commerce appointment that carries no civic power. The victor undertakes ribbon-cutting, tree-planting and sits on the Chamber board. A job bonus is the opportunity to promote business interests.

September-through-December campaigns raise funds; each donated dollar is counted as a vote. Put simply, the candidate who drums up the most cash wins the mayoral sash. Proceeds go to the Chamber and to community non-profits of the candidates’ choice.

Firefighter-turned-realtor Ronnie Sylvia quelled Bay Area blazes before changing careers to allow more time with his wife and three young children. These days, he sells real estate for EXP Realty. He also helps merchants acquire commercial properties through CDC Small Business Finance. In addition, Sylvia and his wife have a store called Once Upon a Child Citrus Heights, which sells gently-used toys.

In his spare time, the candidate works out in a gym and hosts a social media platform called “The Rescue Ronnie Show.” Segments assist charities and share business and real estate knowledge. “It’s important to share,” he says. “My family and I have helped Shriners and fundraised for fallen police officers’ families. I teach my kids to give back. I chose Carmichael Kiwanis Club as my charity because they make the community better. That’s what I care about.”

Rival Kerri Mandes is a fitness/nutrition guru who specializes in personal and group training. The Del Campo High graduate got her Kinesiology degree from Cal State Hayward, and taught in Bay Area gyms before moving home to launch Kerri Mandes Fitness in Carmichael. Her two adult children are already seconded as campaign helpers. “When I told them I was running for mayor, they said: mom – you’re doing what? Now they think it’s cool,” she reports.

“I try to lead by example, rather than telling them what to do. We do several fun-runs for charity every year. My mayoral campaign will support Women Escaping a Violent Environment (WEAVE). That’s a charity near and dear to my heart because I’m a survivor of domestic abuse. I’m passionate about helping victims escape violence and rebuild their lives.”

Anyone can attend candidate fundraising events. The joint Mayoral Mingle will be hosted by Oakmont on September 28, at 5:30 pm. $20 admission includes refreshments.

The 2023 victor will be announced mid-December. Learn more about Carmichael Chamber of Commerce at www.carmichaelchamber.com